Take the survey Share your opinions by Friday, Jan. 31, about how to make Fairfield more bikeable and walkable Read On...

The 2019 Operating Budget is submitted for your review in accordance with Article VI, Section 6.02, Paragraph (A)(6) of the Fairfield City Charter. The proposed budget represents this coming year’s plan for generating revenues and funding expenditures sufficient to implement specific programs, functions and activities during the 2019 fiscal year. As you know, the budget is the City’s primary fiscal planning document. Its major goal is to provide sound fiscal administration. Prudent financial management seeks to meet the needs of the City’s residents and businesses while recognizing the constraints of available revenues. Thoughtful expenditure priorities and maintenance of reasonable staffing levels are key to sound budgeting. 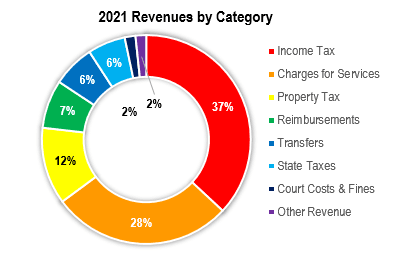 Revenuesfor the proposed budget, including inter-fund transfers, are projected at $79,655,771.

The income tax revenue paid to the General fund has, as its primary intendedpurpose, bolstered the reserves to meet the City’s bond rating agency’s (Moody’sInvestor Services) requirements. The estimated revenue allocation is shown inthe chart.

The largest source of revenue, the 1.5% Income Tax, is projected to generate $30,112,500 for 2019. Revenues are being projected based on 2018 actual collections from this revenue source. The income tax revenues will be allocated as follows for 2018:

Overall 2019 expenditures from all uses total $71,415,773. Historically the City has spent an average of 95% of its budgeted operating funds which, in the past, has allowed for the remaining 5% of unspent funds to be added back to next year’s respective fund balances. With tighter up-front expenditures being budgeted this year, and in years past, it is unlikely that the same percentages of balances will add back to their respective funds at the end of 2019. Various labor contracts had wage/health care reopeners in early 2018 that went unsettled at this point. Therefore, this budget does not include any wage increases beyond the required step or license increases agreed to in 2017. Note that relatively fixed costs such as wages, along with related expenses such as taxes and pension contributions, comprise 58%, or approximately $41,609,681, of the City’s total operating budget.

Theseven major types of funds are charted and depicted graphically below. Thisgraph compares 2019 estimated revenue with 2019 projected expenditures. Eachfund shown below is structurally balanced for 2019. 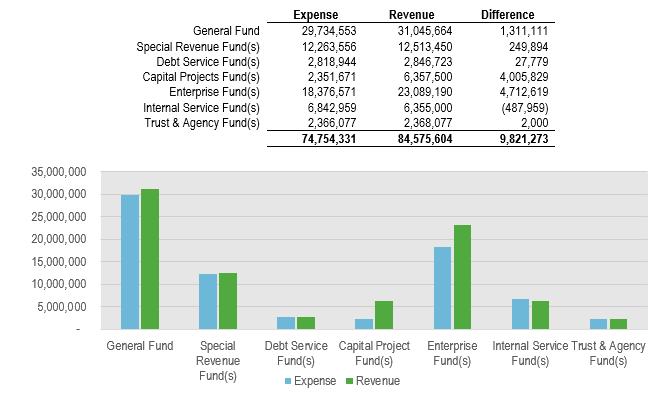 Grants to outside agencies from the general fund have been budgeted at the same level in 2019, at $36,000. Grant requests were submitted from:

The City’s Debt Service funds are dependent on revenues from the General fund, Capital funds, and the Water, Sewer and Recreation Facilities funds. Due to the City’s commitment to provide the debt service funds with first rights on City revenues, as well as our intent to manage the debt effectively, the City’s bond rating received yet another confirmation of its investment grade rating of “Aa1” in August, 2017. The City’s current net outstanding debt for the 2019 Operating Budget will be $17,265,042. The total debt payments in 2019 will be $653,488 for interest and $1,872,586 for principal.

The General fund balance has been the subject of much discussion over the past several years as local government funds and estate taxes have either decreased or been eliminated. The General fund’s main source of revenue, the local income tax, has now stabilized and is being conservatively projected to increase over 2018 projected revenues by 0.5%. The General fund balance is expected to be approximately $14 million at the end of 2019. In conjunction with Council’s goal of a 25% reserve, $7.5 million of the General fund balance is being budgeted as a reserved fund balance. This leaves an unreserved cash balance of $6.5 million to continue to provide services to residents as well as to offset future unforeseen national, regional and/or local economic changes, or in the event of negative occurrences.

The 2019 Operating Budget demonstrates the overall financial strength of the City of Fairfield’s financial position, especially in the General fund. This strength is attributable to the vibrant and diverse economic base that continues to be Fairfield’s hallmark, along with the City’s consistent stewardship of managing expenditures, particularly during challenging economic times.

TheAnnual Operating Budget is a comprehensive road map used to guide theoperations of the City. Fairfield has provided an excellent and comprehensivelevel of service to its residents and businesses within the constraints ofavailable financial resources. This document is a plan to continue thoseexisting service levels, while maintaining the City’s strong financial positionin a sustainable manner.